The New Face of Automation 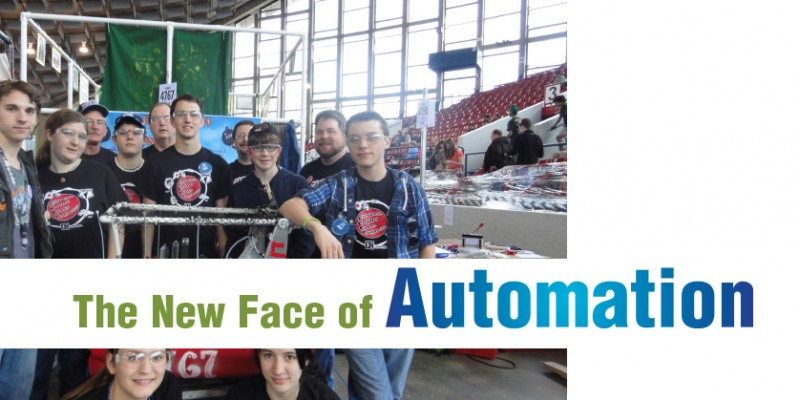 The year Heather Hudson received a toy kitchen for Christmas and decided to take it apart and put it back together before actually playing with it was probably a good indication that she was going to work with her hands one way or another in the future. Always interested in the way things work, from toy kitchens to car engines, Hudson has found her passion in CCC’s automation and robotics class. Hudson takes the class as a student through Cleveland Early College High School and learned about it from CECHS Career Development Coordinator, Karen Sweezy, who says she knew this class would be a great fit for Hudson. “Automation just seemed like a natural fit. Heather loves working with her hands and has an interest in building and working with machinery. I knew this class was perfect for her,” says Sweezy.

“We may live in a push button world, but automation is what makes pushing the button work.”

When you talk to the slight of frame and soft-spoken Hudson, you get the clear sense that she doesn’t mind at all being one of the only females in the male-dominated class. Wearing a pink coat, she smiles and laughs as she and her partner diligently put the finishing touches on a robot they are building for competition. “It doesn’t really bother me at all to be one of the only girls in the class. I feel like I just have similar interests to the guys,” Hudson says. “We are on the same team.”

CECHS serves students in grades 9 – 12 offering not only students a high school diploma upon graduation, but also an Associate degree. Through its partnership with Cleveland Community College, students at CECHS are integrated into classes with college students and this creates tremendous opportunities for those students who might have been underserved in the traditional high school setting. Heather Hudson is a true case in point. Career Development Coordinator, Karen Sweezy knew about Hudson’s interest in helping her dad work on cars in his auto body shop and with this knowledge Sweezy made sure Hudson was there when CCC automation instructor, Mark Gengler, visited the classroom. “When Mark spoke to students about the ATR (automation/robotics) class and automation program at CCC, he brought with him a piece of machinery to demonstrate automation and explain the many possibilities for use within industry. Automation involves computers and when you add to that the potential for employment when you have these skills, Heather, like many others, was intrigued,” adds Sweezy. “Many of our students have dealt with their own personal trials. When we see them interested in something we make every effort to keep that fire lit.”

If you talk to automation instructors, Mark Gengler and Mitchell Sepaugh, they will tell you that students like Heather Hudson and others who are interested in the field of automation and robotics are on the right track and that the growing field of automation is going to be around for a very long time. Both men have worked tirelessly over the last three years with the Automation Federation and the International Society of Automation to create CCC’s top-notch automation program. Gengler says getting to the students early is the key to building a workforce in automation and both men agree that as we continue to see mass layoffs in the manufacturing industry, it is the automation industry that is filling those positions on production lines. “There will always be a need for a worker who can program, manage and repair devices,” adds Sepaugh. “We may live in a push button world, but automation is what makes pushing the button work.”

CCC and CCS Teaming Up for Success

Cleveland Community College and Cleveland County School’s FIRST (For Inspiration and Recognition of Science and Technology) Robotics Team #4767, who call themselves Cleveland County Cross Connectors or C4, brought home the 2013 Rookie Inspiration Award during the 4th Annual North Carolina FIRST Robotics State Competition held at Dorton Arena on the NC State Fairgrounds in Raleigh. “This award celebrates our rookie team’s outstanding success in advancing respect and appreciation for engineering and engineers both within their school and in their community,” said CCC Automation Engineering instructor and team coach, Mitchell Sepaugh.

The C4 team first started meeting in November of 2012, and at various points during the season at least one student from each of the county’s five high schools attended the meetings. C4 received its robot kit in early January and had six weeks to build it. According to Sepaugh, “We felt like we had a great group of coaches available to steer the kids in the right direction. With Mark Gengler from CCC, Eddie Atkins and Bruce Martin from Burns high school and Rod Blanton from Baldor, the team got off to a great start. On February 19, the students ‘bagged and tagged’ the robot and weren’t allowed to touch it until we arrived in Raleigh for the competition.” This year’s competition challenge was called “Ultimate Ascent” and was a robotic extreme Frisbee match.

Before the competition began, teams had to pass inspections in the areas of electrical design, pneumatic design, mechanical design, safety and software programming in order to be allowed on the field to compete. According to Sepaugh, damage repair and modification of the robot was allowed in the team pit between matches. “The C4 team demonstrated extremely well the spirit of the FIRST mission by helping out other teams if they asked. Several teams helped us by giving us spare parts and we were able to give some help back in the form of screws, nuts, bolts, and wires,” he adds.

CCC Industrial Systems instructor and coach, Mark Gengler said, “The primary goal for the students involved is to learn gracious professionalism, teamwork and problem solving through the medium of building a robot. I think our students achieved that goal in more ways than one.” For more information about the FIRST Robotics program at Cleveland Community College, contact Mark Gengler at [email protected] or 704-669-4173.