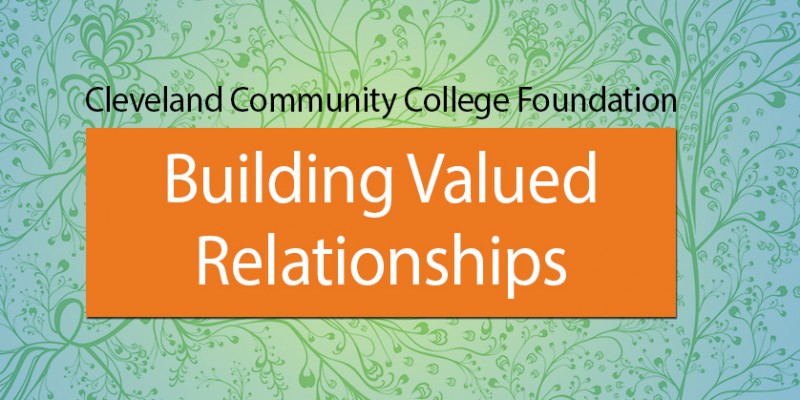 The Foundation became the focal point of a newly created division, “Community Relations and Development,” in 2002. The following personnel served in this division: Eddie Holbrook as Dean; Dr. Shannon Kennedy as Director of Public Information and Grants Development; U.L “Rusty” Patterson III as Executive Director of the Foundation; and Severne Budd as Administrative Assistant. Ms. Budd later became Scheduling and Events Coordinator and Dr. Kennedy is now the College’s Executive Vice President of Instruction & Student Development.

Over the years the following personnel (and respective positions) have been added: Emily Sisk as Grants Development Coordinator and Kristi Shackleford as Development Associate. The division’s title also changed to “Development and Governmental Relations” to reflect the changing focus of community college initiatives.

The Foundation is celebrating with CCC in Fiftieth Anniversary activities throughout the year. Eddie Holbrook, Senior Dean, Development and Governmental Relations notes, “The CCC Foundation has been an active participant as the College expanded facilities and programs throughout the years. Our vision is to continue supporting the College through promoting the Foundation and building relationships with donors. As adaptations are made, the CCC Foundation will support and celebrate the accomplishments of the College during these competitive economic and academic times.”

Last year, we mourned the passing of longtime supporter, Homer Eugene “Gene” LeGrand. Earlier this year we lost his brother, William “Bill” Fain LeGrand. Bill, Gene, and the LeGrand family had grand visions for our community, including the need to spur economic development and provide resources for the community. The LeGrand Center, which bears the family name, fulfilled that vision. Bill spent decades in leadership at Shelby Mill and P&M Warehouse. He also served as a volunteer for many nonprofit organizations.

James “Jim” Rose Sr. and his wife, Patsy B. Rose, are longtime supporters of CCC. Jim served on the Foundation Board of Directors for eight years. The Jim and Patsy Rose Library, located on campus, demonstrates their love of education. Jim’s wife, Patsy, currently serves as Vice Chairman of the CCC Board of Trustees. Continuing Jim’s legacy, Patsy shines as a beacon of progress for the many programs and services offered by CCC.

Carl and his wife Doris saw great promise in the work of early college high school and economic development efforts in Cleveland County. Along with their support of various organizations in Cleveland County including the American Red Cross and the YMCA, the Dedmon Family became benefactors of the Carl and Doris Dedmon Center for Early College High School; and, along with their children, the Dedmon-Yarboro Special Events Hall in LeGrand Center. In Carl’s own words in 2012: “We are pleased and excited…at the demonstration of what can be achieved when boards and our leadership work together,” speaking of LeGrand Center.

Margaret Goodman was one of the first women to enter the field of real estate in Cleveland County. The Margaret P. Goodman Scholarship is awarded to a student enrolled in any Vocational Diploma Program. Margaret strongly believed it was important to support the builders of the homes she sold. This annual scholarship demonstrates her passion for vocational programs.

Jim Horn was a great supporter of numerous community programs, education, and athletics. He served as a member of the NC House of Representatives and was instrumental in bringing the American Legion Baseball World Series to Cleveland County. Jim represented the CCC Foundation Board as Chairman for two of his nine years of service. Community awareness and involvement were very important to Jim and resulted in a desire to support C19 programming through the naming of the C.C. and Sara R. Horn Family Studio Lab, located in the Bailey Center.

During the 2014 year, grants seeking took a more strategic aim. Twenty-seven grants were reviewed and researched as possible opportunities, and a strategy emerged to develop partnerships with other community colleges and agencies.  CCC and the Foundation partnered with ten different community colleges, Cleveland County Government, Cleveland County Schools, and Cleveland Vocational Industries to apply and administer grant opportunities. The College also applied for and received a grant in the amount of $209,876 from the Duke Energy Community College Grant Program to upgrade welding and automation engineering courses with welding simulators and a robot welding cell. This project has brought instructors together with business, industry, and K-12 educators to introduce and enhance welding skills. CCC completed its Golden LEAF-funded Center for Integrated Manufacturing project, which was a collaboration between the lead college, CCC, and Isothermal, and McDowell Technical community colleges. The project created virtual networks at each college to allow vocational students to access software and equipment 24/7.

Emmy® nominated TV show, Carl White’s “Life in the Carolinas,” presented the “Cleveland County Special” earlier this year. The premier highlighted the history of and life today in Cleveland County. The Foundation and CCC were honored to be the presenting hosts for the event, which included music, stories, and the premier screening of the syndicated show. “Life in the Carolinas” is syndicated in eight markets across the Carolinas and Savannah, Georgia with a viewership of over 7 million.

The Foundation had 117 donors, received $775,608 in contributions, and $356,427 in new pledges to the capital campaign in the 2014 calendar year. As of December 31, 2014, the Foundation had a total of $2,114,696 in outstanding pledges. The Thornburg Endowed Scholarship was established by the second College President, Dr. L. Steve Thornburg, and his wife Margaret (Peg) to assist career oriented students. A complete listing of donors to the Capital Campaign and CCC Foundation since 2003 can be found on the inside back cover of CareerFocus. For more information or to donate, visit clevelandcc.edu/foundation. Contributions are tax-deductible as provided by law and make a difference in our community.