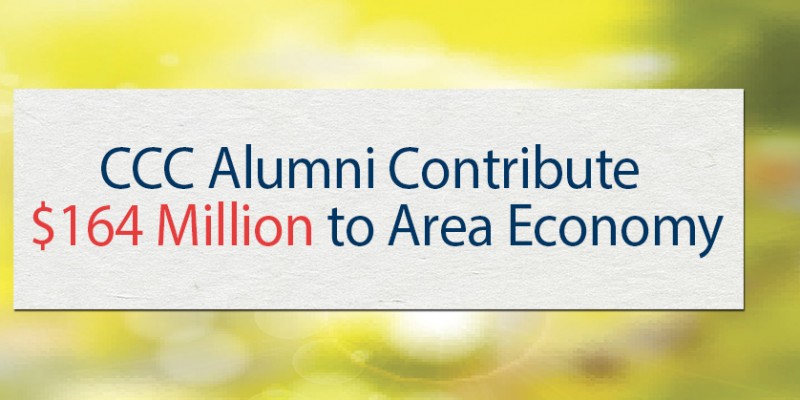 The first-ever statewide analysis of higher education’s impact on the state’s economy shows that Cleveland Community College is making a difference in the lives of citizens throughout its service area.

“This year, Cleveland Community College is celebrating 50 years of serving this community,” said Dr. L. Steve Thornburg, president. “The fact that we have been around that long, I believe, shows that our community already knows we offer value. This study simply gives us the numbers to support that fact.”

The study, conducted by Economic Modeling Specialists International (EMSI), shows that the University of North Carolina System, the North Carolina Community College System and the private colleges in North Carolina together created $63.5 billion in added economic value during fiscal year 2012-13.

Of that $182 million, the study estimates that $164.1 million comes from the accumulated contribution of CCC alumni currently employed within the region. That’s equivalent to creating 3,236 new jobs.

“CCC, from the day its doors opened in 1965, has focused on offering programs and training to prepare students for jobs available in this area,” said Dr. Thornburg. “The study’s estimate that our alumni have contributed $164 million to this area’s economy shows that CCC is able to change and grow to meet the needs of industry throughout our area. Fifty years after opening our doors, CCC’s faculty and staff continue to develop programs that ensure students leave our campus with the skills needed to work in this community.”

The study also looked at return on investment to students, society and taxpayers. It found that CCC alumni will see a return of $2.90 in higher future income for every $1 they invest in their education. That estimate takes into account money students paid to obtain their education, totaling about $5 million, and wages they could have earned had they been working instead of attending school, estimated to be about $50 million.

In addition, the study found that state and local taxpayers in North Carolina paid almost $19 million to support CCC’s operations during the analysis year. The net present value of the added tax revenue resulting from CCC students’ higher lifetime incomes, and the increased output of businesses, will result in $68.5 million in benefits to taxpayers.

“The bottom line is, students who come to us to earn a degree, learn a particular skill, or enhance skills they already have, are investing in their own future,” said Dr. Thornburg. “By doing so, they create more opportunities for themselves and are able to contribute more to the local economy. They also strengthen our area’s workforce, which attracts more employers. In the end, we all benefit.”

Cleveland Community College by the numbers

$2.90 – the return in future income on every dollar that a CCC student invests in their education