The Right Amount of Higher Education 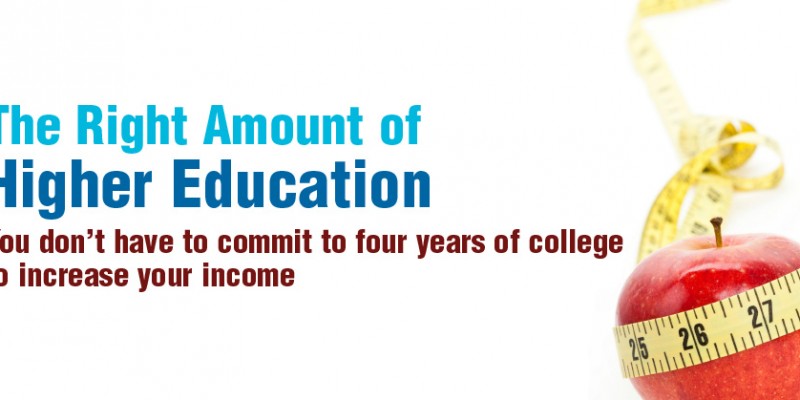 Several recent economic studies shed light on the outlook for national and local jobs, and help answer the question, “How much higher education do I need?”

A 2010 study from Georgetown University “Help Wanted: Projections of Jobs and Education Requirements through 2018,” included these two conclusions:

By 2018, the U.S. economy will create 46.8 million job openings and 63 percent of these will require workers with at least some college education.

By 2018, the postsecondary system will have produced 3 million fewer college graduates than demanded by the labor market.

Middle-skills jobs on the rise

One in every five jobs and nearly half of those that pay $35,000 or more a year are “middle-skills” jobs that require training beyond high school, but less than a bachelor’s degree.

In The College Payoff, labor market economists at Georgetown University indicate that 28 percent of workers with an associate’s degree earned more than the median earnings of workers with bachelor’s degrees.

That’s worth repeating: Nearly 3 in 10 workers with associate’s degrees earn more than half of the workers with bachelor’s degrees. The high earnings of registered nurses have a lot to do with that, but it’s not just nurses.

The economic benefit of additional education and training over a lifetime can be substantial.

Some postsecondary education, even without earning a degree, adds nearly one-quarter of a million dollars to lifetime earnings.

An associate’s degree is worth over $420,000 in lifetime earnings above what you can expect to earn as a high school graduate.

Add it up and the middle looks like a pretty nice place to be!

At Cleveland Community College we understand how important an associate degree can be to your bank account and a recent report by Jon Marcus at The Hechinger Institute says that an increase in wages for community college grads is being driven by a high-demand for people with so-called “middle-skills” that often require no more than an associate’s degree, such as lab technicians, teachers in early childhood programs, computer engineers, draftsmen, and machinists. In Virginia, recent graduates of occupational and technical degree programs at its community colleges make an average of $40,000. That’s almost $2500 more than a recent graduate with a bachelor’s degree.

In the article, Mark Schneider, vice president of the American Institute for Research, says by mid-career, many bachelor’s degree recipients have caught up in earnings to community college grads, “the other facto that has to be taken into account is that getting a four-year degree can be much more expensive that getting a two-year degree,” Schneider says.

Jeff Strohl, director of research at Georgetown University’s Center on Education and the Workforce, says, the center estimates that 29 million jobs paying middle class wages today require only an associate’s and not a bachelor’s degree. “I would not suggest anyone look down their nose at the associate degree,” says Strohl.