2014 Wells Fargo President of the Year 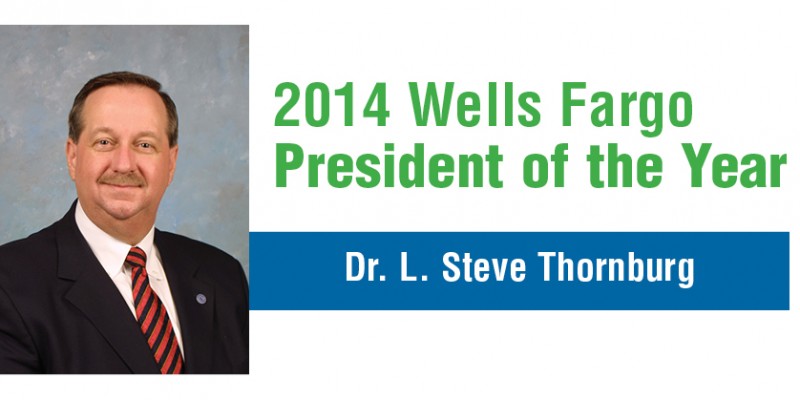 Since Dr. Steve Thornburg first joined Cleveland Community College in 1990, he has worked tirelessly to make the College one of the top community colleges in the state. In early 2014, his 23 years of hard work was recognized when the North Carolina Community College State Board named him the Wells Fargo President of the Year.

Hearing about the announcement, Dr. Thornburg says he is humbled and honored to have been selected out of the 58 community college presidents across North Carolina. “Receiving the award is recognition of the outstanding work our faculty and staff do to serve students and provide for the training needs of area business and industry,” he says.

During his 23-year tenure as president, Dr. Thornburg has been an integral part of many new programs including automation engineering technology, surgical technology, and biotechnology. These have led to the College’s growth not only in student population, but also in facilities and resources on campus, including the Paksoy Technology Center, the Bailey Allied Health and Science Center, the Brown Emergency Training Center, and the LeGrand Center. CCC Board Chair Hoyt Q. Bailey says Dr. Thornburg works with the faculty and staff and the community to pull people and resources together to move Cleveland County forward. “We are very proud of Dr. Thornburg and his leadership at Cleveland Community College. Our Board of Trustees believes that we have the best community college in North Carolina, and that speaks for itself with regard to my feelings toward Dr. Thornburg’s leadership,” he adds.

We appreciate all that Dr. Thornburg does to move the CCC’s programs and services to the highest attainable level. We are proud he is our president and are glad to the State Board agrees with us – he is the best!

Most recently under Dr. Thornburg’s guidance, CCC, leading a consortium of higher education institutions, was awarded more than $23 million as part of the U.S. Department of Labor’s Trade Adjustment Assistance Community College and Career Training grant program. As with any great leader, Thornburg is quick to point out the work done by others. He says, “CCC’s future is bright because of innovative and creative faculty and staff, like the group that put together our grant application to develop curriculum and industry certifications in the mission critical field.”

Prior to joining CCC, Thornburg served as president of Eastern Maine Technical College in Bangor, Maine, for two years. Having grown up in Lincolnton and attending the University of North Carolina at Chapel Hill for undergraduate and master’s degrees, and North Carolina State University for his doctoral degree, CCC and Cleveland County were a perfect fit. CCC Vice Chairman of the Board of Trustees, Patsy Rose, couldn’t agree more, “We appreciate all that Dr. Thornburg does to move the CCC’s programs and services to the highest attainable level. We are proud he is our president and are glad to the State Board agrees with us – he is the best!”

Dr. Thornburg and Peg live in Shelby and have one son, Michael, who is a senior at the University of North Carolina at Chapel Hill.